How Dentists Leverage Twitter to Connect with AACD By Kristen Colwell on March 30, 2017 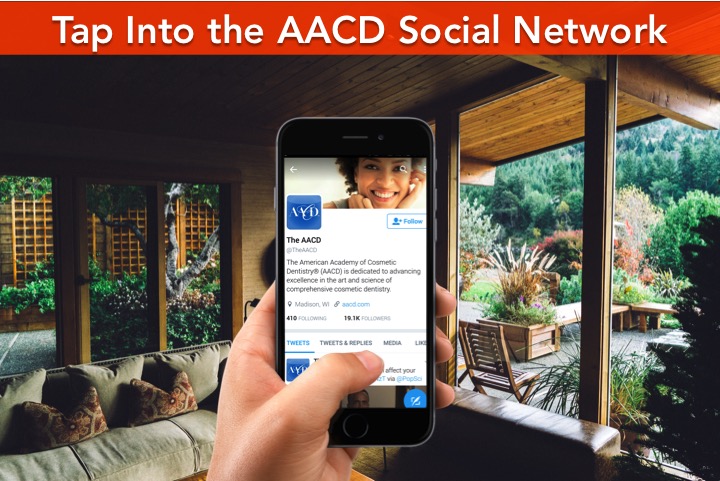 As a dentist, staying on top of what's happening in your field and who's who is a priority.

But what if you are a savvy dentist who is short on time or money?

Let me introduce you to social media, which can "teleport" you to top industry events and connect you with the movers and shakers in your field. All without leaving home.

Events, such as the American Academy of Cosmetic Dentistry (AACD) Annual AACD Scientific Session April 18-21, 2017, are just a click away when you tap into social media.

But which social media channel is the right one to use?

When it comes to events, we think Twitter has the edge due to its ability to target conversations through hashtags.

Take advantage of the tips below to maximize your participation at ACCD events ... whether you attend or not!

Tap Into the AACD Social Network

AACD regularly distributes thought-provoking content and interacts with its members on social media. All you need to do is tap into the AACD network. See our tips below for getting started.

The AACD distributes Twitter posts about its events before, during, and after ... giving you many opportunities to engage.

The trick is knowing the proper etiquette. In the examples below, notice how AACD constructs posts. Last year they tagged posts with the hashtag #AACD2016. This year it's #AACD2017. The hashtags make it easy for you and your peers to search Twitter to find the conversational thread.

Another attention-grabbing technique AACD employs is including images in their posts. That makes their Tweets more likely to be seen and shared.

Pro Tip: If you are posting to social media be sure to include an image with your post to make them "pop." In addition to catching the eye, visual information is processed many times faster by the human brain than text.

To join this virtual block party, simply share, reply, or like these posts. By including the proper hashtag, the AACD will know that you interacted with their content. If you want to broaden the reach of your message, include other strategic hashtags and Twitter handles in your reply. More on that below!

Here are some sample Twitter posts showing how Tweets are constructed. Note how hashtags, links, and usernames (identified by the @ symbol) are used. Here's the complete Twitter Glossary.

Congratulations to everyone who passed the written exam at #AACD2015 in San Francisco! http://t.co/aE1Si0BvB4 pic.twitter.com/1zwKfqMTPU

Dr. Bakeman is an AACD Accredited Fellow. See you in Toronto! #AACD2016 https://t.co/z1tMufZbUx

Here are some examples of strategically crafted Twitter posts from AACD 2015:

Looking forward to @TheAACD #aacd2015 today with @MicroDental and #SleepApnea lecture by Dr. Dickerson and esthetics lecture by Dr Hakim

Networking can take place whether you are at the event or not. See the first example below. These attendees took a moment for a photo and, thanks to the manner in which the image was posted, it is easily located to this day with a simple #AACD2015 Twitter search.

The following post by Gary Takacs is a great example of non-attendees reaching out via social media. He may not be at the event, but he is certainly aware of industry happenings.

Wishing all my friends @TheAACD Conference in San Francisco an awesome Meeting! #aacd2015

AACD member Jamie Sands, DDS, has five Twitter lists. If you are new to Twitter and are trying to connect with great cosmetic dentist resources, Dr. Sands' lists are a wonderful place to start.

Just select "Lists" and "Subscribe" to any list that you would like to regularly view. Once you review the news feeds from these lists, you can isolate the Twitter accounts that regularly post the type of information you are seeking. Follow just those key accounts, and you are well on your way.

Here is a live Twitter list made up of past and present AACD speakers. See what they are talking about right now... and engage. See you at AACD2017, whether you make it to Las Vegas or not!